About Us. Cabo Magic ® Sportfishing has been arranging Exceptional Cabo Fishing Charters at Affordable Rates since 1999. Tommy has fished in Cabo since 1978 as he explored his Mexican heritage. In 1999 he decided to open up a Sportfishing Charter Co. and asked his wife Lori to take over reservations. They have been under the same ownership ever since. His grandfather was a Zapatista who fought to free Mexico.

We are #1 in Customer service since 1999 and spend All the time you want, plus plenty of information to make your charter what you want. We strive for Excellence in all that we do with our Charters, Sportfishing in Cabo is not something you want to do like purchasing a laptop on-line. A quick phone call helps us guide you into your Charter. Then no problem, e mail and texts are just fine. We want to cultivate a relationship with you that will last for years. We’ve also been under the Same Ownership and Same Leadership since 1999.  Our Success Started by “Blending the Unique Mexican Culture with American Standards”. “We Treat Everyone with Dignity and Respect”.

Humble beginnings introducing our distinctive approach to the previously un-organized sportfishing industry in Cabo San Lucas. We are proud knowing many of locals and their families since 1979. Twenty years ago we were approached by our local families to represent them. We agreed. THOUSANDS of  PHOTOS from clients tell Our Reel story. Cabo Fishing Charter We have kept every Guest photo and letter since 1999.

Cabo Magic®  Sportfishing’s success in “Cabo San Lucas Fishing Charters” is a combination of several factors:  We represent the very Best crews – Captains, First Mates, Deckhands and yes, Onboard Chefs – – – All have tremendous pride in their work and it shows!  Many began with us and moved on to other boats and owners.  We are equally proud of them and their successes. Vessel Owners/Partners understand the necessity of repairs and maintenance according to strict standards. Our attention to the myriad of details in the business of Sportfishing in Cabo San Lucas, MX.

We were established in 1999 with our flagship “CABO MAGIC” a 35′ Bertram Sportfisher.  Not long after, we added another boat and another, as the business grew exponentially.  We were approached by American, Canadian, and Mexican boat owners asking us to represent them.  Many of the local ‘old-timers’ have known Tommy for years. He began fishing the waters of Cabo San Lucas in the early 1970’s. Going back even further, in 1994, we established Importadores de Los Cabos. Importing a variety of merchandise for hotels and fishing fleets including Penn ® Tackle and RCA Televisions.

Then we converted an old brick “Llantera” (tire shop) behind the first Pemex in town and opened Musica Y Mas, where we sold toys like Barbie ®, in demand Levis ®, car stereos, boom boxes, Irons, blenders, food processors, and introduced music on CD to the locals.  When we outgrew that location,  we moved up the hill, near Cruz Roja where we were the only place to buy such products other than Electronics Ruth and Aramburo downtown for 7 years. We started publishing our Team Cabo Magic Fish & Catch Report in 1999 as a means for people to see daily what the fishing was like.

Our original website www.cabomagicsportfishing.com was painstakingly and lovingly custom created by Tommy, Alan and Lori on an asp platform in 1997, long before Google launched in September 1998.   The site initially offered current area conditions and general information on Cabo San Lucas Fishing Charters.  It was an ideal way to proudly display photos  and letters we received.  One day Lori learned that “Pescador” means “Fisherman” and thus VIP Guest was created – VIP has always meant Very Important Pescador!

We’ve been showcased many times, on Sportfishing shows including many that have aired on ESPN – OUTDOOR CHANNEL – OUTDOOR LIFE – VERSUS NETWORK.

We’ve been making magic + dreams come true since the day we were established.For some it surely can be beginner’s luck, and we’ve been told, its also personal bucket list dream fulfillment.

We’ve welcomed guests from all walks of life

Sportfishing is located in the beautiful paradise of Cabo San Lucas, Baja California Sur , Mexico approximately 1000 miles south of San Diego, California .  It is called “Lands End” and is Where the Majestic Pacific Ocean Meets the Bountiful Sea of Cortez. It is world famous as the Striped Marlin Capital of the World & is a Top-Pick Destination for World Class Sport Fishing.

We invite you to Fish With Us Aboard Tournament and Award Winning CABO MAGIC® Sportfishing charter boats, including Pangas, Cruisers,  Sport Fishers, and Yachts that are Licensed + Insured ~ With Modern, Top Of The Line Tackle, Gear, Electronics & USCG Safety Standards, and look forward to the opportunity to say “Welcome Aboard” whether you are a beginner, a professional and everyone in between!

Get hooked up year-round with competent, skilled, and hard working crews, who are on the water more than 350 days every year. Some crew member are 3rd and 4th generation Captains.  All crew members participate in local tournaments, many boast impressive, and multiple tournament wins. Our crews want to help you earn your bragging rights, and are eager to show you how they do what they do. All boats, tackle and gear are maintained according to strict standards.

Your safety is a #1 priority, followed immediately with entertaining you, and getting you on the fish.  You can choose from “Bring Your Own” and “All Inclusive” sport fishing charters, or some combination thereof, as we are ever mindful of your budget and personal preferences. We will gladly work with you to arrange the adventure you dream of – charters ‘out of the ordinary’ can be created to satisfy every taste and all budgets –-Frequently Asked Questions We Provide First Class & Affordable Cabo San Lucas Fishing Chaters.

From your boat you watch the billfish rush in, its black dorsal fin and high scything tail cutting the surface sheen. Seizing the lure at speed, it turns. Your outrigger suddenly jerks aft, only to buggy whip back as the fishing line snaps free and its long curve of slack straightens into the sea. All hell breaks loose on the deck. The mate scrambles to set the hook and secure the other lines while the captain, yelling orders in Spanish, backs the throttle to position his stern for the fight to come.

Getting You monies Worth

The paying customer is about to discover how “getting your money’s worth” is defined in the waters of Los Cabos, Mexico. Operating just below the Tropic of Cancer off the south end of Baja California, where the Pacific swell becomes the blue-jade Sea of Cortez, the sportfishing fleet of Cabo San Lucas targets black sea bass, bonitos, dorados, roosterfish, wahoo, sailfish, and, at the top end, black, striped and blue marlin. With marlin, the striped version is a year round possibility; the big blues from June to mid-November.

The good news is that the quarry is plentiful and you don’t have to bring any deep-sea experience to the boat. Forty thousand are caught and, for the most part, released here annually. The bad news is that everything in Cabo is on a buyer beware basis, so check the reputation of your boat and its crew before shoving off. Otherwise, just book in advance (online is preferable), especially when the blues are running.

On the Water in Cabo

Arriving at our dock at 6 a.m., my wife, Nancy, and I were welcomed aboard the Cabo Magic, a 35-foot Bertram Sportfisher operated by Tommy and Lori Garcia’s sportfishing company of the same name. Like the other high-tech fishing boats that call the Cabo San Lucas marina home, it was built with taming marlin in mind. The boat’s flying bridge allows you to spot the fish. Its dual 30’ outriggers, from which the trailing lures dart and dive in the wake astern, draw them in. And its fighting chair gives your back, arms and thighs and oarsman’s leverage against the big fish.

Charters through Cabo Magic Sportfishing start at $340. Coming out of the harbor, Captain steered deliberately back and forth, scanning the dawn-brightened sea ahead. The lures, bullet-headed and colorfully skirted, were already popping in the wake, but this was sight fishing, I realized. Hunting actually.

“What’s that splashing over there?” Nancy asked him. “Porpoises,” he said. And later, to a bigger, single, crashing splash, “Manta ray.” Then, three times, “Shark!’ Hammerheads, these were, and big ones, too, though their grayish fins seemed small enough in the breeze-freshened swell 50 yards off the bridge. But the focus of this search appeared as a high broad dorsal fin and sickle-length half-section of the tail.

Under them lay, in the lee of the chop, a long resting shadow. Throttling to an idle we stood off as the mate cast a live mackerel just in front of the resting fish. The mackerel, hooked through the nose, darted and slashed like any game fish against the tug of the line, but the marlin did not react. “Fish no hungry,” the captain said after several minutes, and we started away.

“Senor,” the mate said, gesturing me with his eyes to the fighting chair as I scurried off the flying bridge. The butt of the rod, now secured in the gimble socket on the fighting chair, was bigger around to my grip than the handle of a baseball bat. Overall, the sturdy fishing rod was as along as a broom. It had a pulley wheel where the eye would be on a regular stick. The fish put its weight into it and the rod strained forward, the line guide of the huge brassy Penn reel leaping back and forth.

The line which had been slanting into the water as far from the boat as a pitcher’s mound is from home plate, was soon as far out as second base. Suddenly, the striped marlin came out of the water, deep in center field. It snaked back and forth in the Mexican sun, all 7 feet of it showing, bill to tail. “Marlino” Captain Hector yelled.”Arriba!” It crashed down and came out again fluidly blue and gray, arching long and trailing water in the light. Then down and away, and the slave work of pumping and recovering began.

This nice striper would tip the scales at about 120 pounds. It was considered average for the species and, boated before it was released, seemed a dream fish in the size, proportions, coloration and power. But this is a dream of multiple elements. There is the town itself, a tangle of discos, hotels and raucous merchants; the immaculate marina at day’s first light; the humid tropic air; the patois of the crew; the manifest fertility of the sea; and those torso-straining surge of a big fish on heavy tackle. All this lies easily at hand for those who would venture to bustling, beckoning Los Cabos. 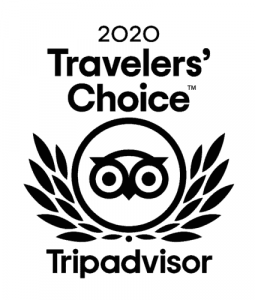 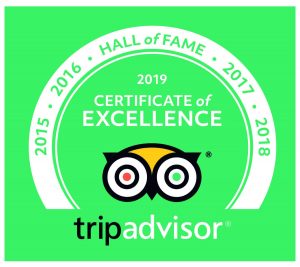 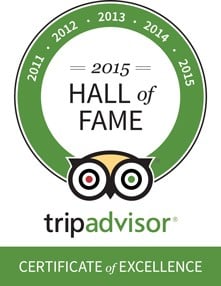 Certificate of Excellence Hall of Fame